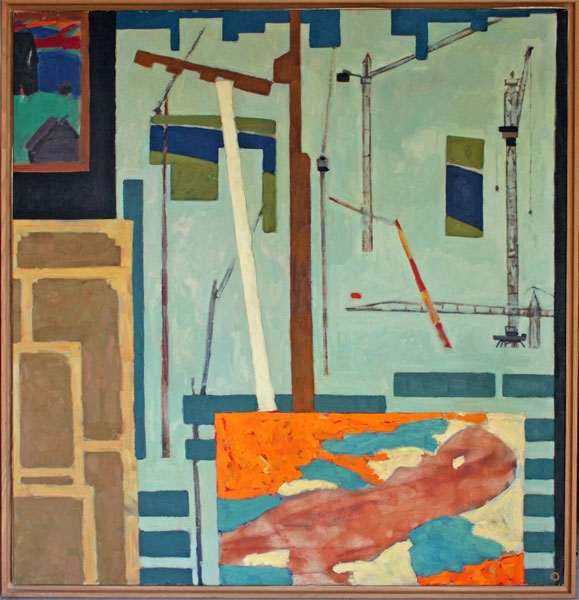 THE ARTIST'S SOLFEGGIO, OR TEN COLOURS OF THE RAINBOW

Oskar Kacharov's studio is in the centre of Moscow - at the down-town end of Gorky Street (now Tverskaya st.) No lush studio, though, rather modest and badly in need of renovation. But the district is surely prestigeous - look through the window and you're looking directly at the big clock on the central Post Office, and down below - the bustle in Gorky Street. The clock is ticking off time into eternity, the bustle and noise are distracting. But not for Kacharov - nothing can distract him. He's found of the incessantly milling crowds and permanent chaos of the capital. His studio is constantly filled with friends, pupils, fellow-artists, musicians, architects, theatre people.

Rezo Gabriadze, a talented playwright, artist and sculptor, working in film, drama and puppet theatre, once wrote to him, "Dear Oskar, I know few artists as dedicated as you are. That must be painfully hard. What I like about you as a person and a painter is your sense of measure, your nobility and artistry. Thank you for your warm tones and for your cold tones and for their correlation."

The words "painfully hard" are not merely lip service. Kacharov was never spoilt by fortune's favours. He is bubbling with the energy of resistance. He rejects attempts to place him, his views and his painting among the crop of discoveries permitted in the recent years by glasnost. he has never before craved success regardless of the cost involved and so has never been mentioned in the press for some 40 years.

Oskar Kacharov, the son of a doctor, was born in 1924, in Kiev. He remembers his father who was killed in the Second World War with tenderness and gratitude. His mother was a highly cultured woman who encouraged his artistic interests, and herself had great knowledge and understanding of art.

Oskar showed artistic promise in early childhood. He liked drawing - copying first, then turning painting into a visual medium of self-expressions. This became and indispensable part of his life. He joined the art studio of the Kiev Young Pioneer Club, then attended the Taras Shevchenko art school. He also took lessons from Mikhail Yarovoy, an artist carrying on the classical tradition of the last century's "Peredvizhniki" painters. Yarovoy singled out the youngest of his pupils and advised him to go to Moscow for further study. He gave Oskar a letter of recommendation to the great Nesterov.

In 1940, the 16-year-old Oskar Kacharov arrived in Moscow. The city won his heart once and for all. He failed to pluck up enough courage to approach Nesterov though, not even with the letter of recommendation. After a fortnight he left for Kiev, but Moscow became his dream for that time on.

Oskar Kacharov continued his studies going out into the country to paint from nature. He was living a full and exciting life, he was finishing school… the farewell party for school leavers was cut short by a bombing raid - the Second World War had caught up with him.

In March 1942 Oskar, as his father had done before him, volunteered for the front. He fought in the artillery and airforce and finished his war service in Berlin. Passing through Poland he had seen his father's name in the list on one of the headstones with red stars which marked the mass graves of soldiers… Forty odd years later he painted a canvas entitled "Memory" in which his warm and cold tones mixed to express the bitterness he felt on that day.

The war was over, he had survived and returned to his native Kiev. But even in peace-time the war still tugged at his heart and plagued his mind with images. Those memories shaped his art, asserting the joy of life, the sheer happiness of being alive.

At 22 Oskar was a man of considerable life experience. He moved to Lvov with his mother and sisters and continued his education at the Lvov Institute of applied and decorative art, in Roman Selsky's class. All this time he never gave up his intention to live in Moscow. In the summer of 1948 he selected his best works with the help of his teacher and went to the capital.

He entered the Surikov art college in Moscow attending the classes of such excellent masters and art scholars as Alpatov, Mochalsky, Dudnik, Yefanov, Zhilinsky. His diploma project entitled "In the Hospital" combined essential features of his art: lyricism, spontaneity, feeling of form and colour.

After graduation Kacharov lived and worked in Kishinev, in Moldavia, teaching at the Repin art school. In 1954 he took part in a national art exhibition in Moscow, and the next year he was admitted to the Soviet Artists Union.

Moscow still attracted his irresistibly. He returned there again in 1962. He brought with him some interesting paintings and also his distinctive style, nurtured by his mother and by his teachers in Kiev. He was devoted to the tradition of Old Russian art, to the achievements of the 19th-century Russian painting. In Moscow he found new friends - fascinating creative people. A new life was opened up for him, one filled with deeper and richer meaning.

Kacharov finds it natural for an artist in response to a wealth of information and emotions to be constantly ready to embark on a new period in his work. A new subject or technique may be prompted by a friendly talk, a street scene, a fleeting association. It is possible to sense this attitude in the artist's work of the 60s and 70s which included subjects seemingly unsuitable for the realm of art. The titles of his portraits, landscapes and genres are quite ordinary and rather prosaic: "By the Lake", "Football Player Igor Netto", "Milkmaids in Tvarditsi".

It may seem paradoxical to a superficial observer that even in his pictures about the war - "In Fascist Captivity" (1959), "Soldier's Widow Praskovia" (1969), "Memory" and "In the Enemy Rear" (1985), and others - the painter expressed positive, life-asserting feelings: nature's triumphant bloom, a proud stand against violence and inhumanity in the face of danger and death. Or, as in the picture "Memory", a feeling of unity between those lives lost but still remembered and those of the young generation, is enhanced by the red colour dominating the picture.

An ever-present desire to incarnate the joy of life has led Oskar Kacharov to use hyper-intense colours. Colour is his principal medium of expression. Colour dissonances are used as an aesthetic norm, and he experiments with new laws for the juxtaposition of bright pure colours. First the artist used seven basic rainbow colours (the post-impressionists discovered regular links of six colours with one complementary tone).

After much trial and error Kacharov found mathematically the harmony of the tones arranged in a circle crowned with white. Each dominant colour has an opposed tone and two complementary ones. Warm tones to the right - warm yellow, orange, red, violet… cold tones to the left - cold lemon yellow, green, blue - deepening into violet again. And the combination of blue and violet produces black.

To prove the validity of his system the artist painted 30 canvases containing a total of 10.800 colour modules.

Kacharov's system logically expresses his perception of colour. It has taken him 25 years to find natural colour correlations. He calls his discovery "colour solfeggio". The theme, though, is worthy of a deeper and quite separate study.

Kacharov's long searches were not a detached academic study, but a gradual discovery of the endless possibilities of colour expression leading into a realm of colour and rhythm where the artist was able to pour out his innermost thoughts and feelings. As the leading Soviet painter Alexander Deineka predicted in 1965, Kacharov has found his own original form of expression.

Mikhail Greku, Kacharov's friend and prominent modern painter in his own right, says this of Kacharov's latest works: "… Bright, often with dissonant colours like the harmonies of modern music… life-asserting, traditional, charged with the energy rendered through colour, strong and metaphoric… It is not the snow that he paints, but its whiteness, not the sky, but its blueness, and so on…"

This is certainly true of the canvas "To the Sacred Memory of Rembrandt", of the polyptych "Black and White", of the picture called "Requiem". It's all a far cry from slavishly naturalistic painting and as such is often our of tune at official exhibitions. It has often caused the displeasure of officials running the Soviet arts. But the public leave the following entries in the visitors' books. "This is a talented and striking continuation of the Russian avant-garde tradition, Kuznetsov, Lentulov, Malevich or Saryan would never balk at Kacharov's paintings…"

Kacharov, though, doesn't feel he belongs to the avant-garde. He doesn't like to be pigeonholed. he simply says, "You should always paint as if this is your last picture."